Napa Valley native and world-renowned Master Sommelier Andrea Robinson is the "go-to" expert for all things wine. She is one of only 26 female Master Sommeliers globally with a strong culinary pedigree as a graduate and former Dean of the French Culinary Institute. Andrea takes the seemingly daunting subject of wine and food and brings it down to earth for all to understand and enjoy. Throughout her career, she has been featured across leading national television networks and publications, the winner of three James Beard awards, and was the first woman ever named "Best Sommelier in the United States" by the Sommelier Society of America. Click here to learn more about Andrea Robinson.

Stay tuned- Andrea Robinson will be featured on The Somm Set throughout April 2021!

Paul Grieco was practically born in a restaurant, where he was introduced into the world of service and hospitality at a very young age. Upon returning from a 28 day trip to Italy, Paul's wine knowledge transformed to nearly expert level. He spent the next six years working with his father and grandfather at La Scala, overseeing the beverage program, and managing the front-of-the-house staff. In 2004, Grieco and chef-partner Marco Canora opened Hearth in the East Village. In 2008 Grieco opened the first of two wine bars, Terroir, which many wine lovers seek to experience unique wines found among the fringes. A lover of grape juice, Paul's philosophy and wine preferences push the limits and pay homage to the alternative side of the wine industry!

Stay tuned- Paul Grieco will be featured on The Somm Set throughout March 2021!

Sommelier Jon McDaniel is the founder and CEO of Second City Soil, a Chicago-based wine consultancy. He works with wineries, suppliers, distributors, and various global marketing agencies on growth and brand strategy in the Chicagoland area, United States, and globally. Jon is recognized as one of America's top wine professionals and is one of the most awarded Sommeliers. He has done a little bit of everything in the wine business, from his own California wine label - Amos Cellars to being a founding member of the United Sommelier's Foundation and his newest endeavor, The Vine Hive. When he's not tasting wines for his business, you can find Jon drinking drinks that only an 85-year-old Italian Nonno would appreciate.

Stay tuned- Jon McDaniel will be featured on The Somm Set throughout February 2021!

Chris Blanchard is part of the small group of just over 200 individuals in the world to pass the Master Sommelier exam. He is currently the National Sales Director for VHR Vine Hill Ranch, the acclaimed Oakville Cabernet Sauvignon from the historic Napa Valley vineyard, and also a founder of the United Sommeliers Foundation.

With over 30 years in the wine business, he has opened and created wine programs for numerous prestigious Michelin starred restaurants across the country and has represented some of the Napa Valley's most exclusive wineries, including Far Niente, Etude, and Chappellet.

His restaurant experience includes many years as the Wine Director and Sommelier for REDD Restaurant, where San Francisco Magazine named Chris as the "Critic's Choice Best Wine Director," naming him as one of the "4 Stars" in the entire San Francisco Bay Area food scene. Forbes Magazine named his wine list at REDD as one of the "Top Wine Lists in the World," and he has been featured in numerous Food & Wine Magazine articles. He served as consulting Wine & Beverage director for Hollywood's famed Chateau Marmont, as well as opening the Solage & Bardessono resorts in Napa Valley, as a sommelier at Auberge du Soleil, and as a mentor and trainer for many aspiring sommeliers around the country.

Stay tuned- Chris Blanchard will be featured on The Somm Set throughout January 2021!

Sommelier and Wine Director, Tonya Pitts, has been in the food and beverage industry for over 20 years. She is known globally as a multi-talented wine professional, an industry changemaker, and a compassionate role model. Her career began in St. Louis, Missouri as a host during college. Eventually, her fine art studies relocated her to San Francisco, taking her first job with Chef Judy Rodgers at Zuni Cafe and Chef Jeremiah Tower at Stars Restaurant. Soon after, Tonya was running the wine program for Loretta Keller at Bizou Restaurant. It was with Loretta Keller that Tonya realized her true passion for wine. She has been featured in and a judge for Wine & Spirits magazine, Tasting Panel, and numerous news and industry publications throughout her career. Additionally, Tonya judges for the San Francisco International Wine Competition and continues her wine studies with the Court of Master Sommeliers. You can find Tonya working the dining room floor most nights at One Market Restaurant in San Francisco.

Stay tuned- Tonya Pitts will be featured on The Somm Set throughout December 2020!

Doug Frost is a Master of Wine and Master Sommelier as well as an author and wine consultant based in Kansas City, MO. In 1991 he passed the rigorous Master Sommelier examination and two years later became America’s 8th Master of Wine. He was the second person in history to complete both exams and more than a quarter century later he is still one of only three people in the world to have achieved both these remarkable distinctions. He consults with many retailers, restaurateurs, wineries and distillers in marketing, merchandising, sales, education and sensory perception.

Most recently, Doug and business partner Brad Bergman celebrated their first release of wine from their winery, Echolands, out of the Walla Walla Valley. We chatted with him on his excitement to be making wine in a style that not many people are making right now, a style he thinks is worth making! Taste along with us on Nov 19th for an epic Raid Y(our) Cellar installment featuring the Spanish “First Growth,” Vega Sicilia, the most powerful producer hailing from the Ribera del Duero. Doug will be live, giving his insight on these high scoring stunners!

Stay tuned- Doug Frost will be featured on The Somm Set throughout November/December 2020!

DLynn Proctor has been a leading figure in the wine industry for 20 years.

His many accomplishments include working alongside Michelin chefs, and features in TV series and films—including the internationally acclaimed wine documentary series, SOMM and work as Associate Producer in Netflix’s featured film, Uncorked—have earned him recognition as “Somm to the Stars” in popular culture. DLynn is the Director of Fantesca Estate & Winery on Spring Mountain, with wines made by Heidi Barrett.

As a leader in the beverage industry, DLynn has spent the last decade in global leadership roles with Penfolds Winery and Fantesca Estate & Winery, focusing on import/export, sales, marketing, strategy, and consumer relations. The previous decade of his career, DLynn was instrumental in building restaurant and training programs, private client and retail wine lists, and expanding new venue operations, while garnering accolades as an accomplished sommelier. Most recently Mr. Proctor co-founded the non-profit Wine Unify, which has been recognised by Wine Business Monthly as a Wine Industry Leader for 2020, honoring changemakers who shape the way the wine industry operates and how consumers drink wine.

Jodi Bronchtein, Advanced Sommelier's journey began somewhere between figuring out how wine worked with food while working at fine dining restaurant, McCrady's in Charleston, SC, and a magical aha-moment with a bottle of 2001 Chateau Musar. Nowadays, Jodi spends her time exploring Napa's best wineries (120 and counting) and working the floor at PRESS Napa Valley! Follow along with us as we feature Jodi throughout September & October 2020.

Alexander LaPratt MS fell in love with wine at a young age while working for Madeline Triffon MS. His passion has taken him around the country where he has worked the floor for some of the world's finest restaurants, including Michael Mina, The French Laundry, Daniel, Atera, Le Bernardin, and Jean-Georges. In 2013 opened his own restaurant, Atrium DUMBO, in the posh neighborhood of DUMBO Brooklyn. Featured the month of August 2020, Alexander gave us the inside scoop on all of his favorites- from Champagne to BOND Estates! 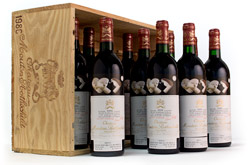 Customers on our mailing list receive first notification of all our amazing new collections as they arrive, in addition to special offers for your favorite wines.