Here is a playback of our exclusive tasting featuring Podere Le Ripi and hosted by Sebastian Nasello, Head Winemaker and CEO of Podere Le Ripi, and Tom Dorman, Advanced Sommelier. Check out the featured wines below (while supplies last, quantities limited).

With vineyards on both the east and west sides of Montalcino, Podere Le Ripi produces terroir-driven Brunello di Montalcino wines from three single vineyards. Different climatic expositions and different soils allow the wines to portray those different characteristics. Founded in 1997 by Francesco Illy, the estate has been biodynamic since 2012 in a project spearheaded by winemaker and CEO Sebastian Nasello. In the absence of chemical interventions, the biodynamic approach allows the grape plants to grow in the most natural way.

The western side is rooted in a natural oasis called “Il Galampio”, in the middle of a native oak forest, the vineyards have managed to grow at an altitude of 150 meters above sea level. This side mainly receives evening sun and in the morning is sheltered by the surrounding hills of Montalcino. The average age of those vines is around 30 years old, planted following the authentic Montalcino tradition (4.500 plants per hectare) trained using spurred cordon. The soil is mainly composed of clay and limestone, rich in minerals with river pebbles and metamorphic rocks (galestro) belonging to a more recent geological age. Such components create feminine and classic wines, which also give generous grapes with crunchy tannins also home of the Sogni e Follia.

The eastern side is home to around 250 meters above sea level, over there, our historical single vineyards are warmed up by a tepid morning sun. Castelnuovo is renowned for wines with a well-structured body that show off some of Montalcino’s oldest terroir, characterized by 5 million years old oceanic clay, which is very often mixed with sodium so that the clay is quite salty. The tuff and the siliceous sand are compressed by geological pressures, making them very compacted. Also very rich in limestone - coming from marine fossil - this makes the soil a very pure marn, influenced by all kinds of possible minerals. Furthermore, Monte Amiata – an ancient volcano - is only 7 nautical miles away, so it's not surprising that sediments of volcanic debris can be found in the soil.

Here the density of the vineyards varies between 5000 plants per hectare to 11100 vines per hectare, all the way to 62000 vines for the Bonsai vineyard. They are mostly planted following ancient training methods such as goblet and guyot. The vineyards are constantly subjected to a natural breeze coming from the Orcia river, and they are fairly well protected by the Amiata Mountain (1.738 masl), which allows Castelnuovo to be the driest subzone of Montalcino. Here we are able to express all the intensity of the best Sangiovese with perfect mineral balance, which is the unmistakable character of these areas. The wines Bonsai, Lupi e Sirene and Amore e Magia are the main protagonists of this land. 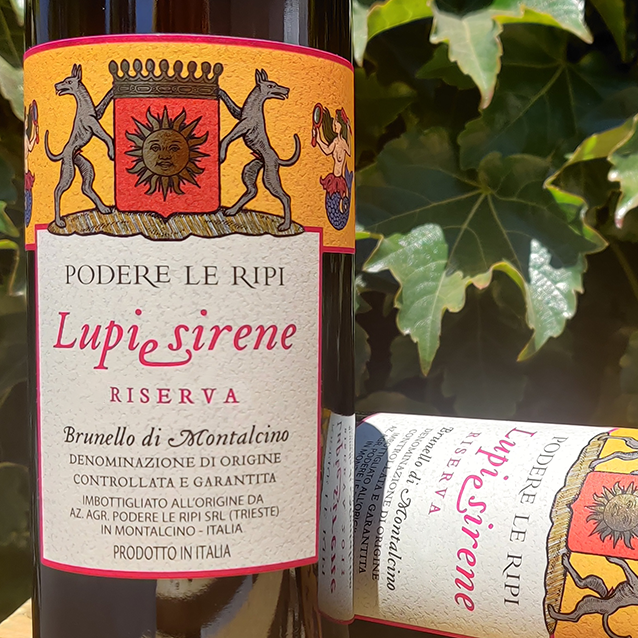